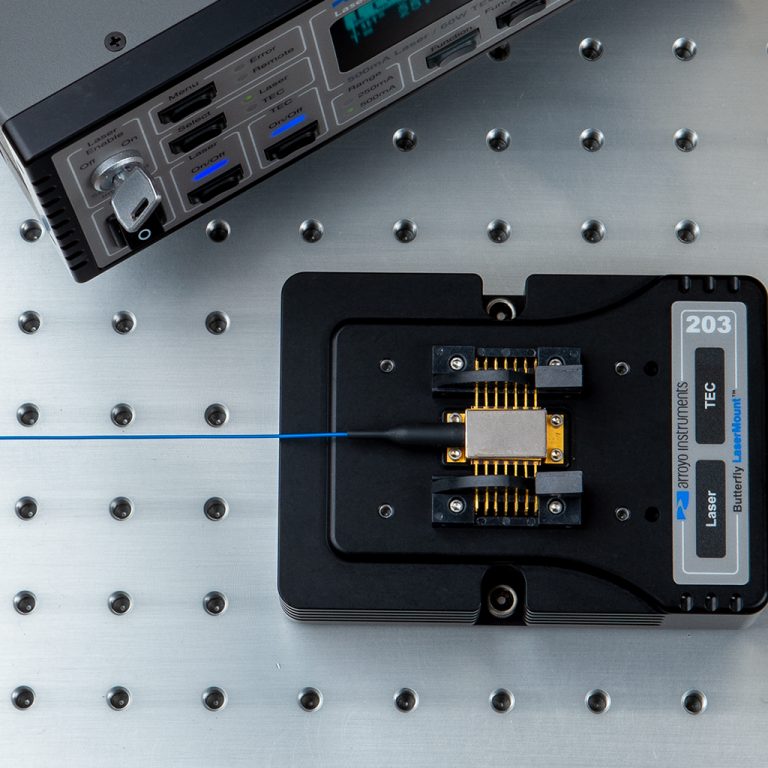 The choice of a 203 versus 205 butterfly mount is often not obvious, especially for those that have not worked with butterfly lasers in the past. Because proper thermal control is important for butterfly laser performance (and possibly even to prevent damage to the laser), it is important to make sure you have the right configuration. So what is the difference between a 203 and a 205?

A passively cooled mount, where the heat generated by the laser is “passively” exchanged into the air around the mount via a heat sink inside the 203. Has a single DB15 interface for connecting to the TEC inside the butterfly device. Because of the passive cooling, the case temperature will always be some amount above ambient temperature, depending on how much heat is being generated by the laser and internal TEC. A 200-FAN fan base can be added to increase the performance of the mount for higher power lasers (those generating a few watts or more of waste heat)

Incorporates a thermoelectric cooler (TEC) that actively cools the case temperature of the butterfly module. Has two DB15 interfaces: one for connecting to the TEC inside the butterfly device (“TEC” input) and a second for connection to the TEC in the 205 mount itself (“MOUNT TEC” input). This active cooling in the 205 mount allows the case temperature can be controlled to a known and repeatable temperature. However, it typical requires a second temperature controller (plugged into the “MOUNT TEC” input), so there is added cost to the system as compared to a 203.

Choosing a 205 is typically due to one of two reasons:

Unless your application falls into one of these two categories, a 203 is usually the right choice.

As a side note, you might be considering the 205 as a universal mount: use it for both types of butterfly modules (without or without an internal TEC). Unfortunately, when using it with butterfly lasers that also have an internal TEC, you would need two temperature controllers: one for the external TEC in the 205, and one for the internal TEC in the butterfly laser. This is because TECs are poor thermal conductors when not being controlled, so an unpowered 205 would be a very low performance heat sink. This might work for very lower power butterfly lasers, but use only with caution and continuous monitoring. You would better off purchasing both a 203 and a 205 so that you have the mount you need for the laser type, rather than a 205 and two temperature controllers.

Browse all Arroyo products by category.

Find out where you can purchase our products.